A Fire at the Capitol: The Commission on the Move 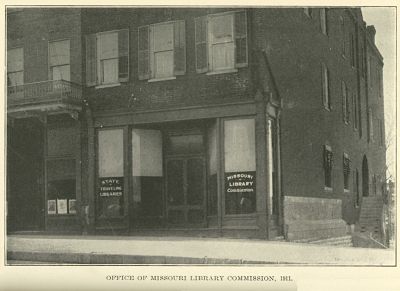 The (second) burning of the Capitol occurred on February 5, 1911 when a bolt of lighting struck the Capitol dome. The resulting fire made it necessary for the Commission to vacate the Annex as the rooms were "required by the Commission of Permanent Seat of Government for the apartments of the four elective office which had been rendered homeless by the destruction of the capitol building."

The move took place February 6th and 7th, resulting in the Library Commission temporarily setting up in the basement of the public library. The public library extended an invitation for the permanent use of rooms, but they were found to be inadequate for storage and installation. The Commission then rented rooms on the main floor of the Hess building on the corner of High and Washington streets. The Secretary's report for 1911 states that once the new capitol is built, the Library Commission would be provided with adequate quarters closely connected with those of the Education Department.

For more information on the history of the Capitol, visit the History of the Missouri Capitol from the State Archives or The Many Capitols of Missouri from the Legislative Library.