On March 20, 1907, Senate Bill 232 of the 44th Missouri General Assembly was passed and signed into law by Governor Joseph W. Folk, creating the Missouri Library Commission. It called for the Commission members to be comprised of the State Superintendent of Schools, the President of the State University, and three people appointed by the governor. The Commission's duties were to:

The First Members & Staff of the Missouri Library Commission

First Office of the Commission

While the Commission was not able to work in the Capitol building, the Commission's President had this to report about the location and outfitting of the first office of the Missouri State Library Commission:

"Greatly to be regretted was the fact that suitable rooms were not obtainable in the Capitol building. Quarters were finally secured in the Capitol annex, formerly occupied by the Supreme Court. To adapt these to requirements necessitated the expenditure of $242.70, while heat to December 31 has cost $78.50. This total of $321.20, with cost of heat for remainder of the year, should be credited to the Commission account by the Legislature at its next session, as that amount is not in justice chargeable to it.

In the matter of equipping the room, $303.18 was expended for furniture, a number of articles being used which were found in the building and turned over to the Commission through the courtesy of the Supreme Court. This effected a saving of several hundred dollars...Respectfully submitted, Purd B. Wright, President Missouri Library Commission."

The office would remain at this location until February 1911.  See A Fire at the Capitol 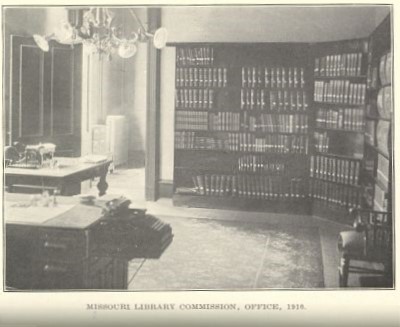 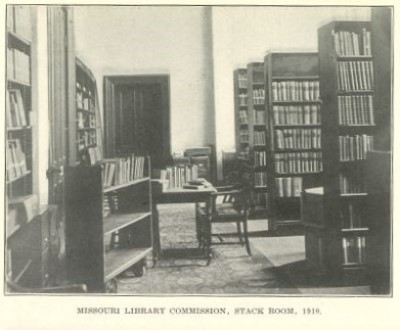