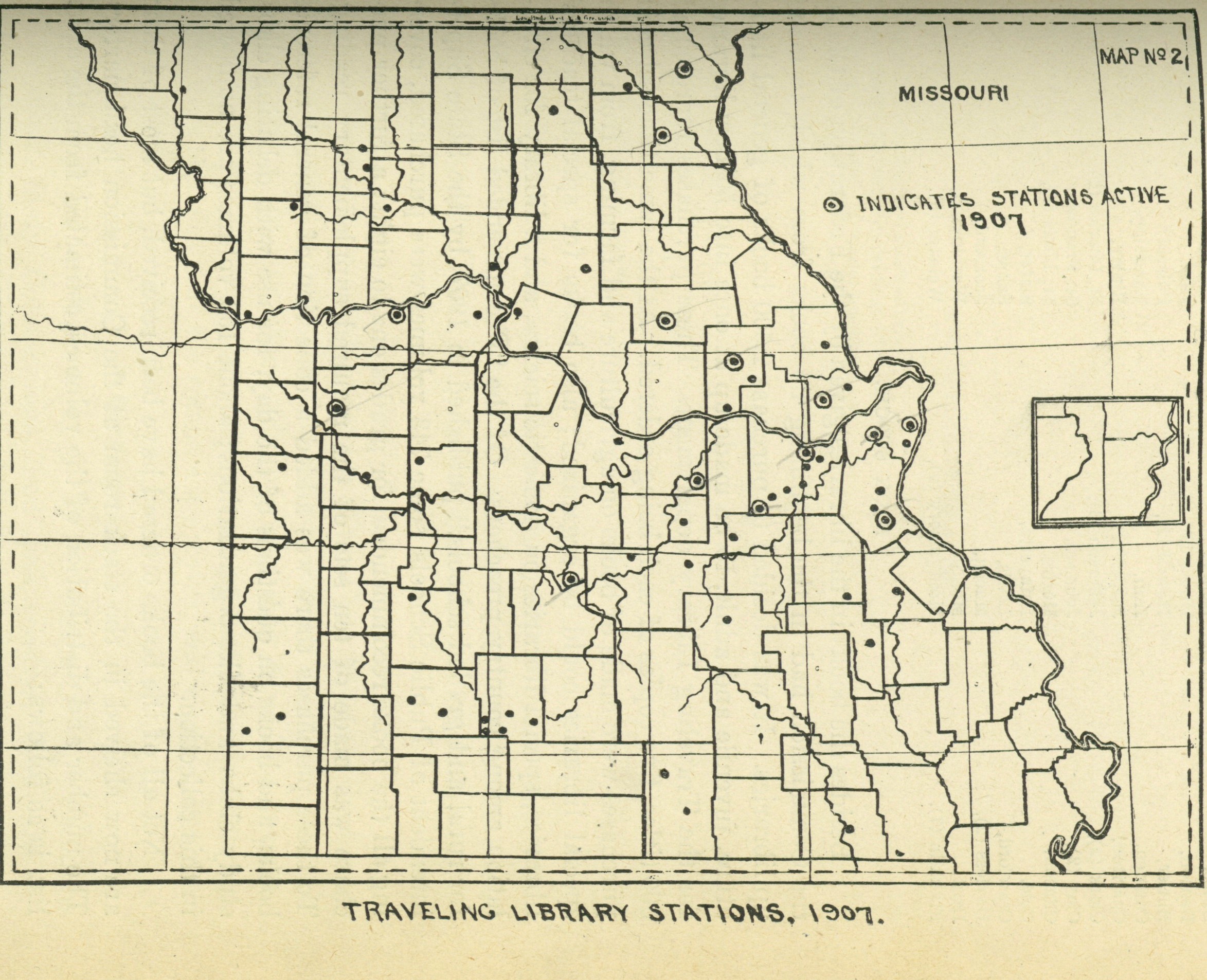 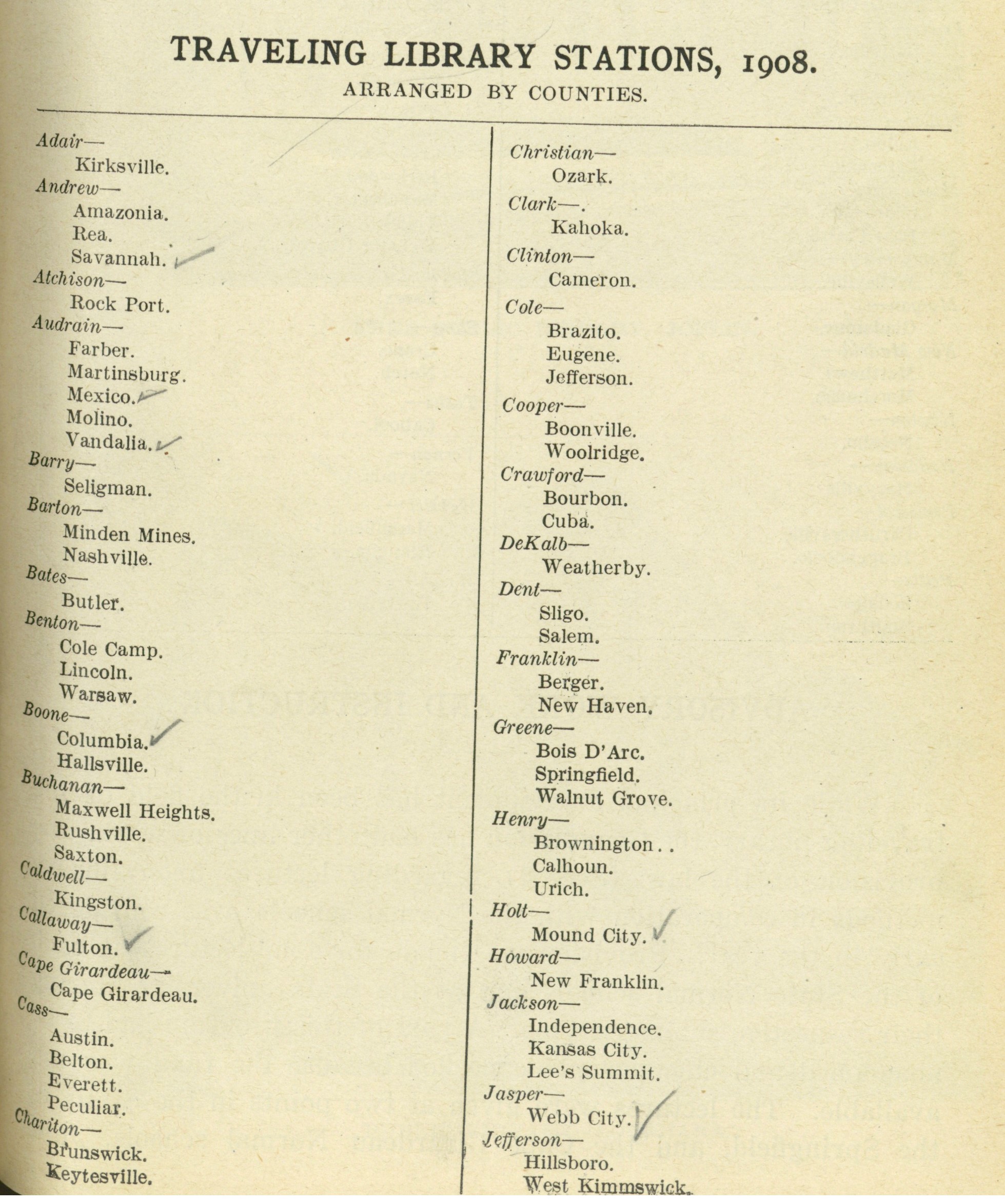 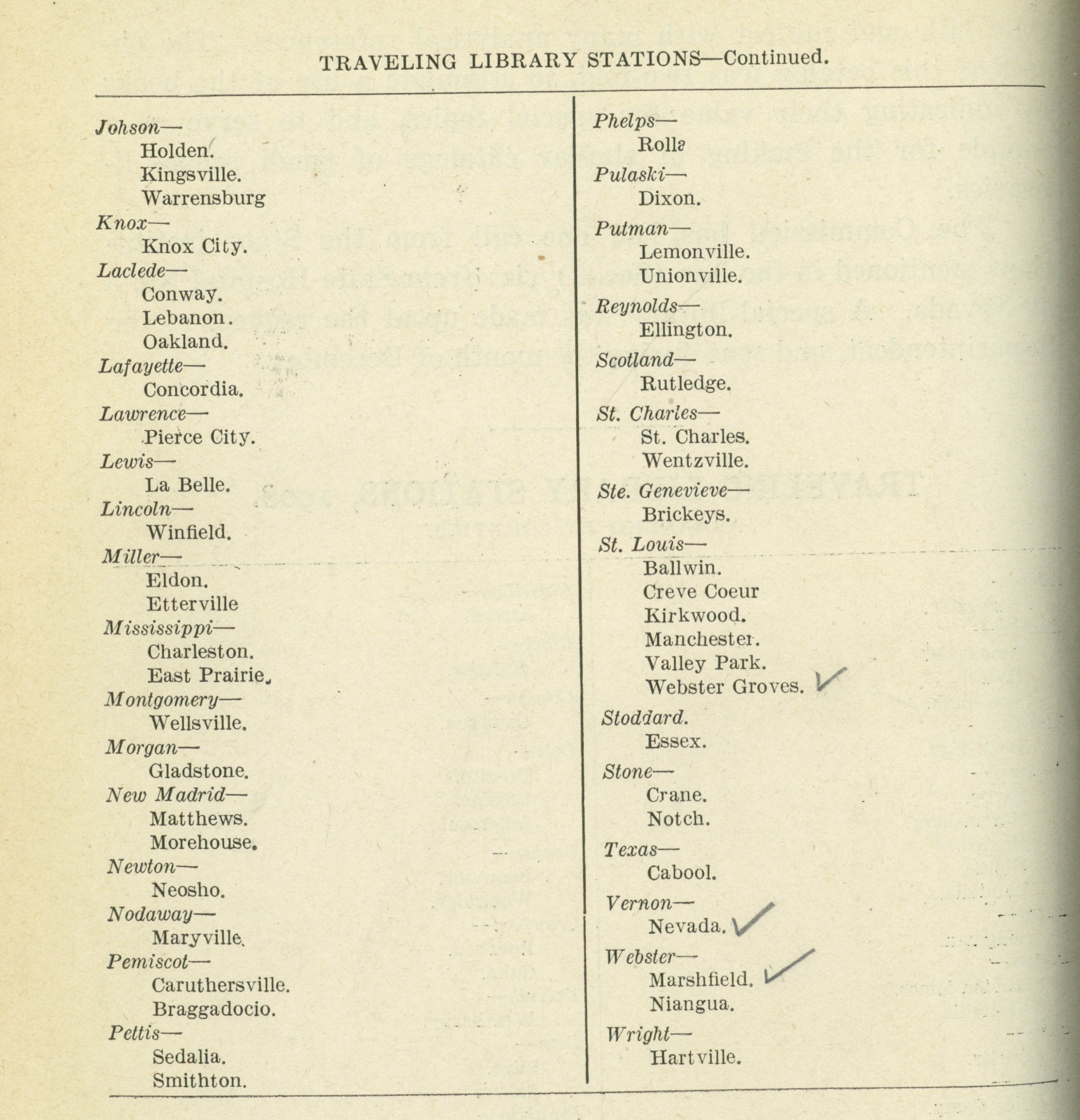 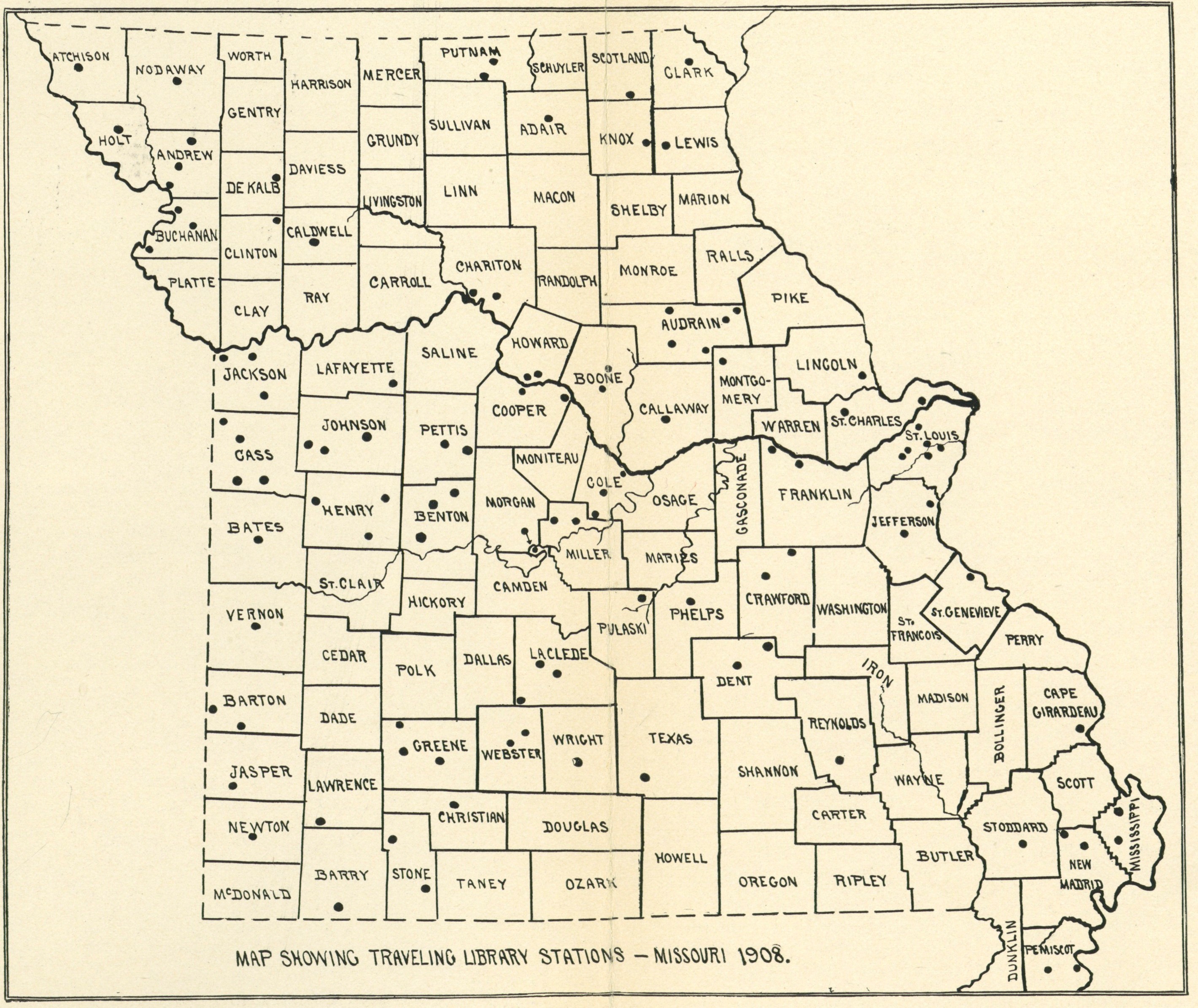 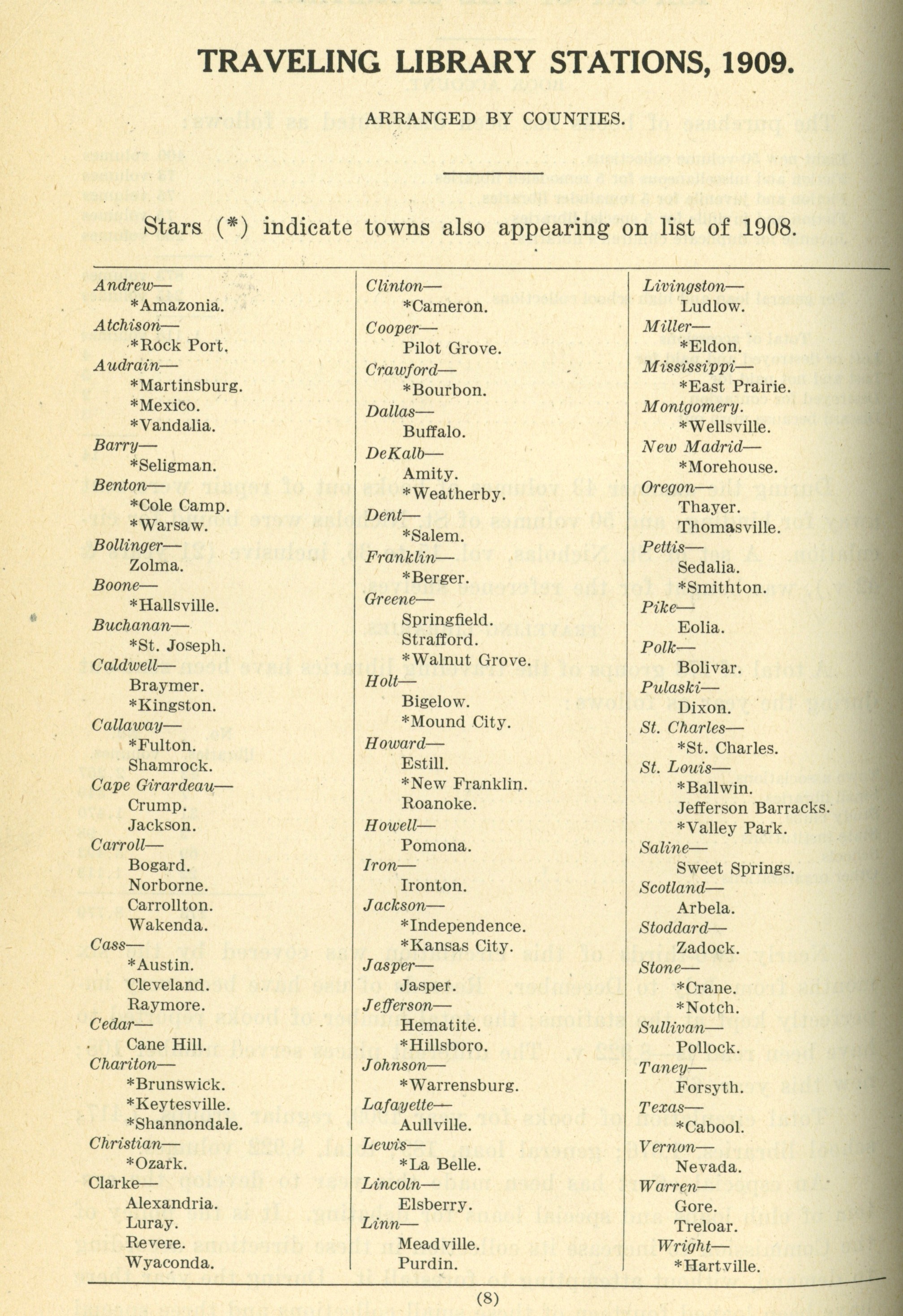 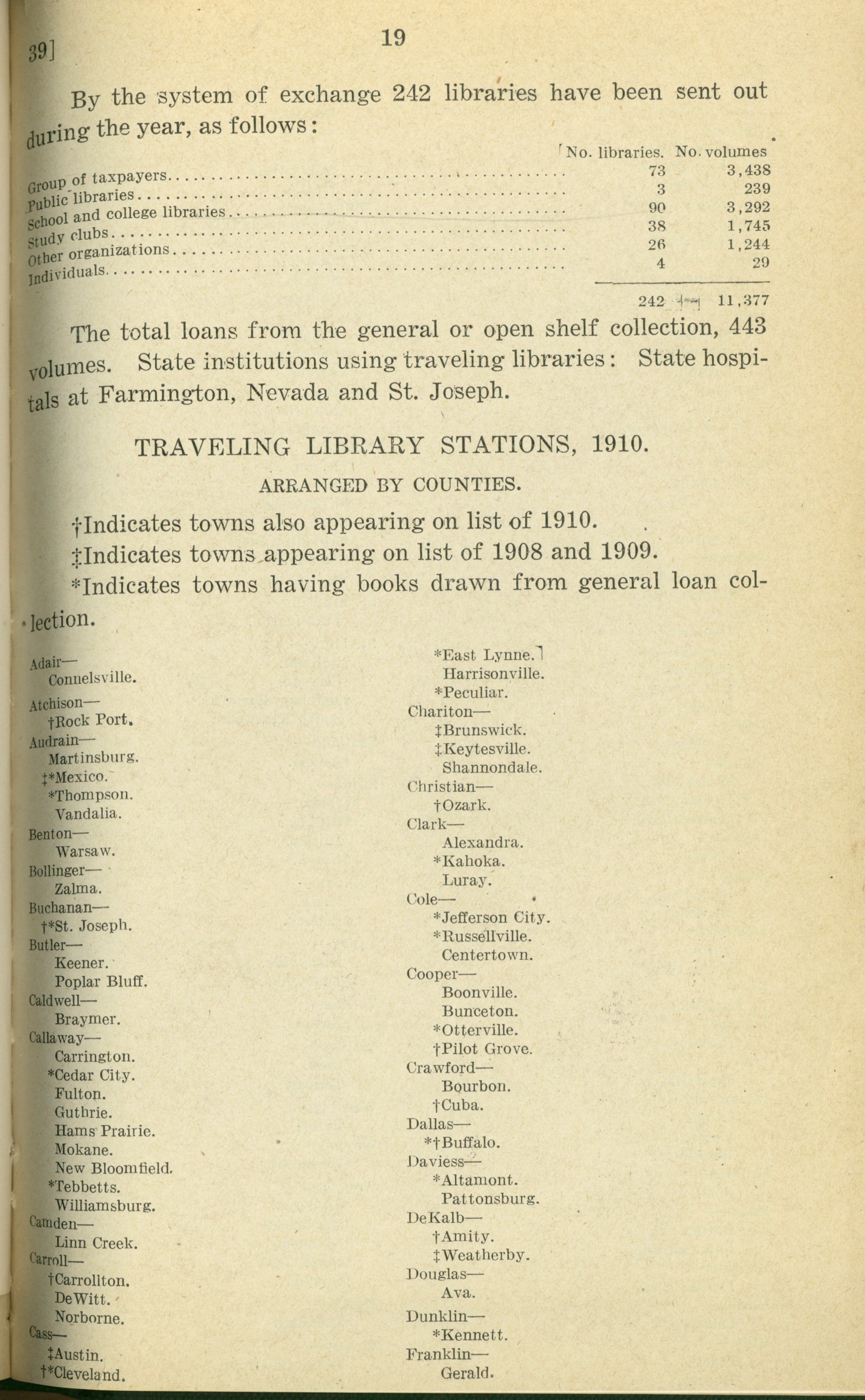 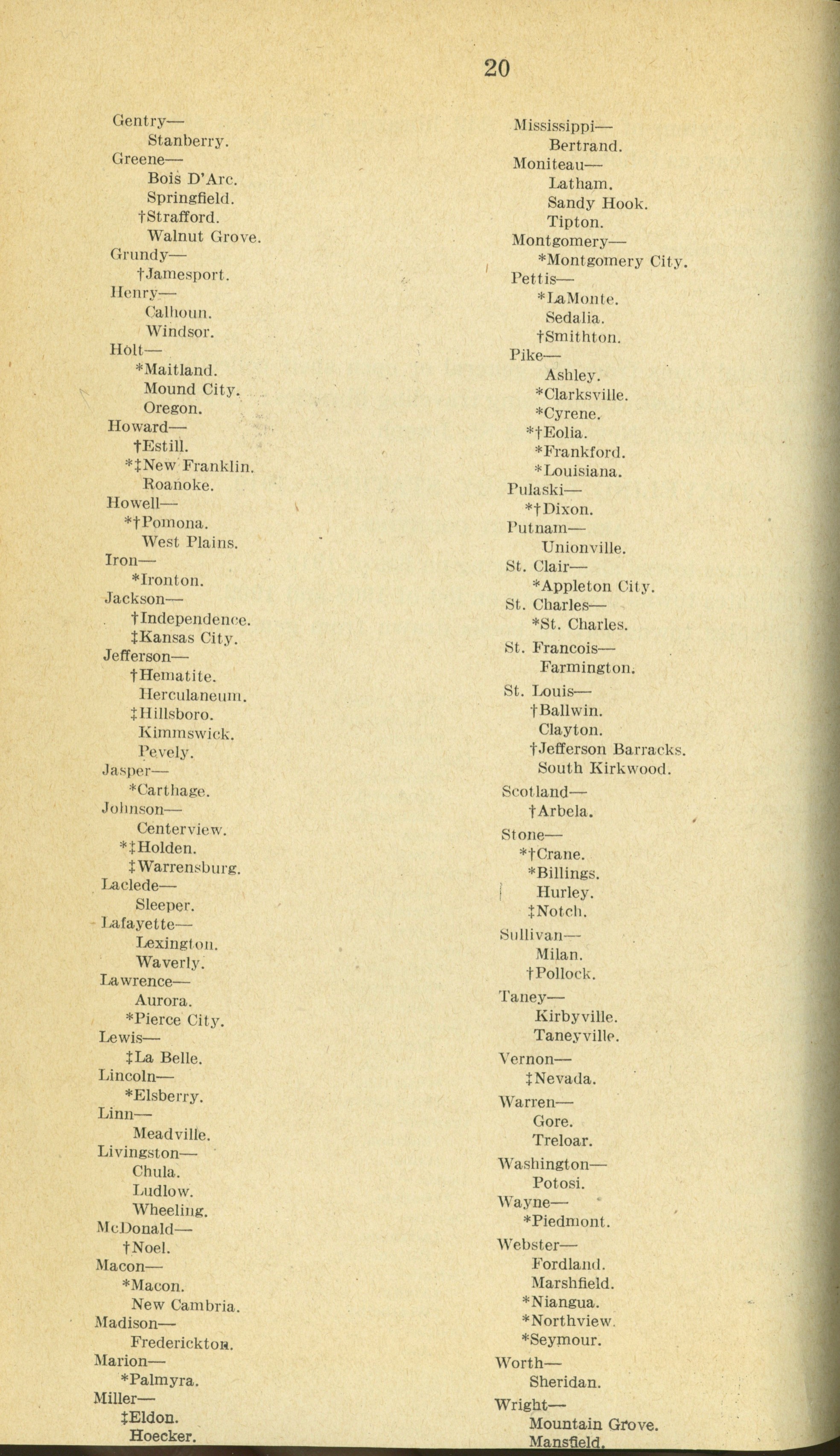 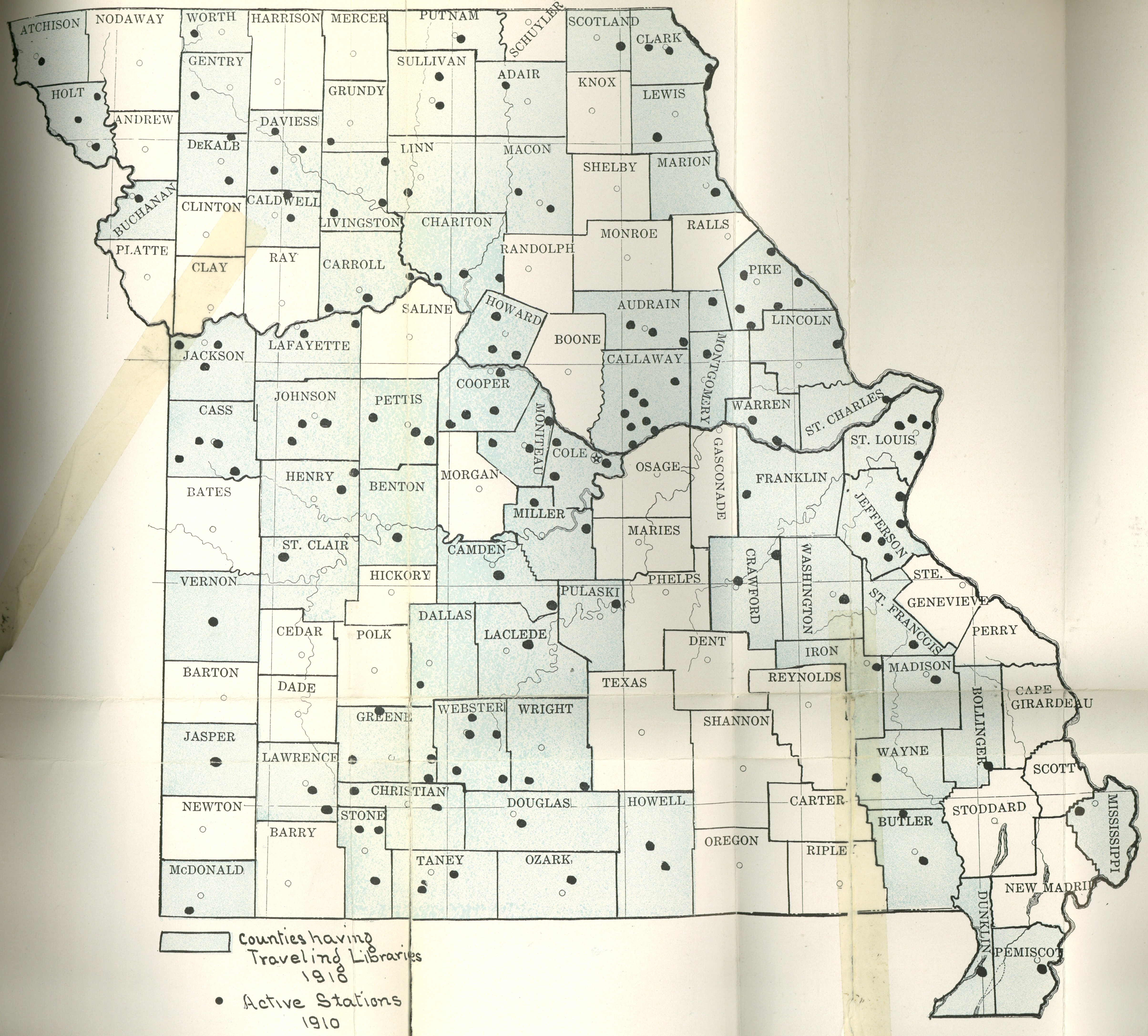 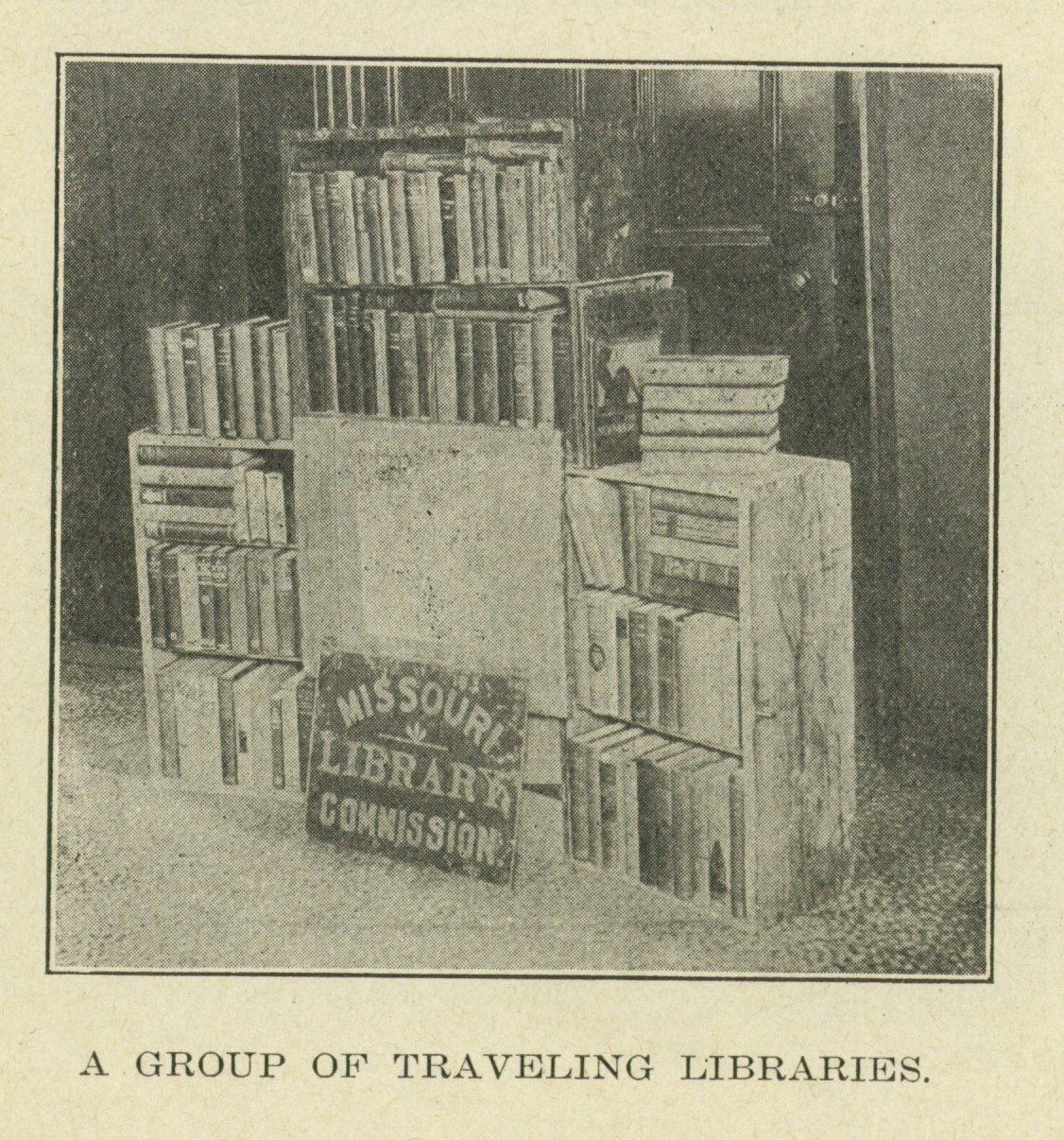 A Group of Traveling Libraries, 1910 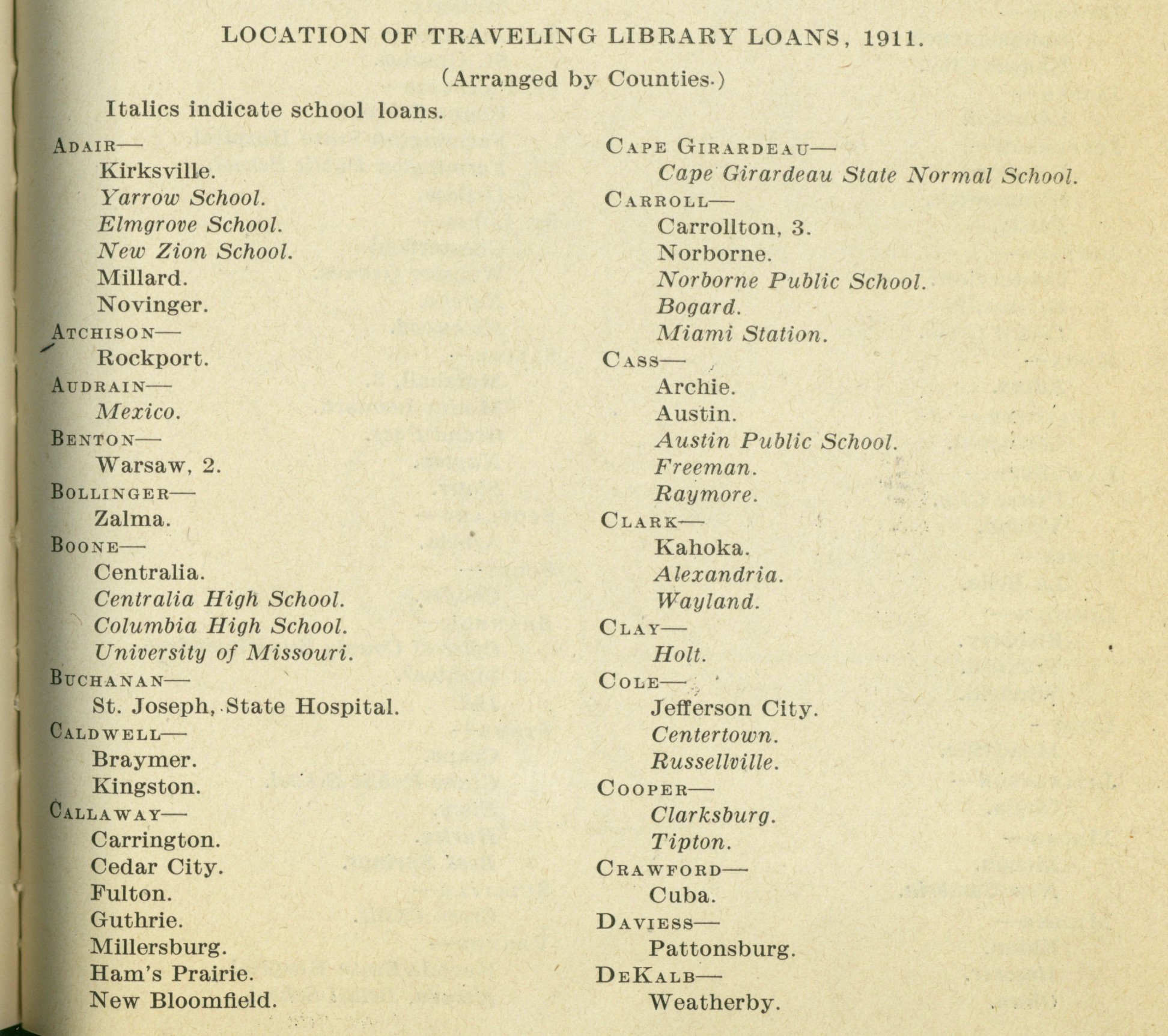 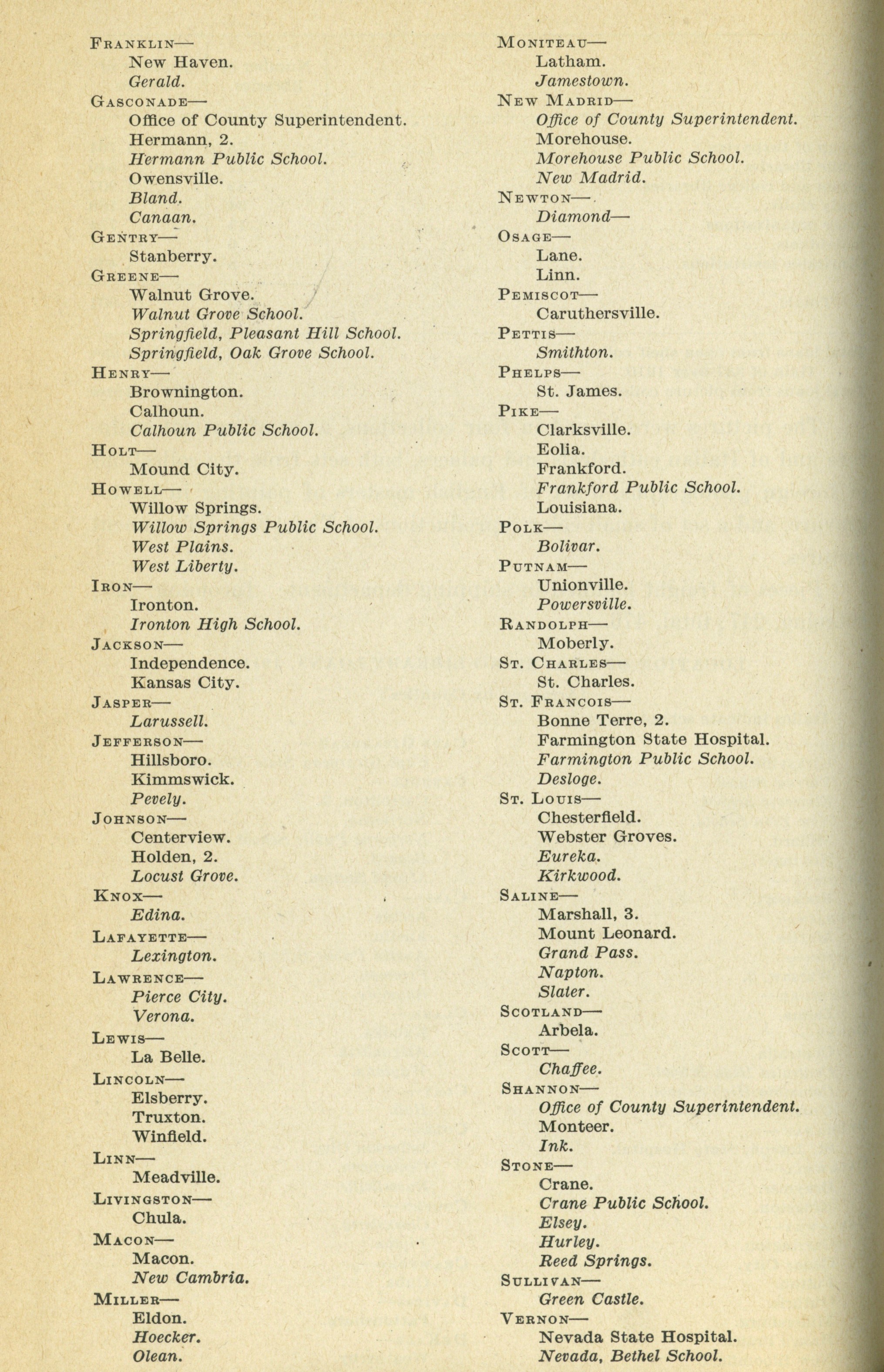 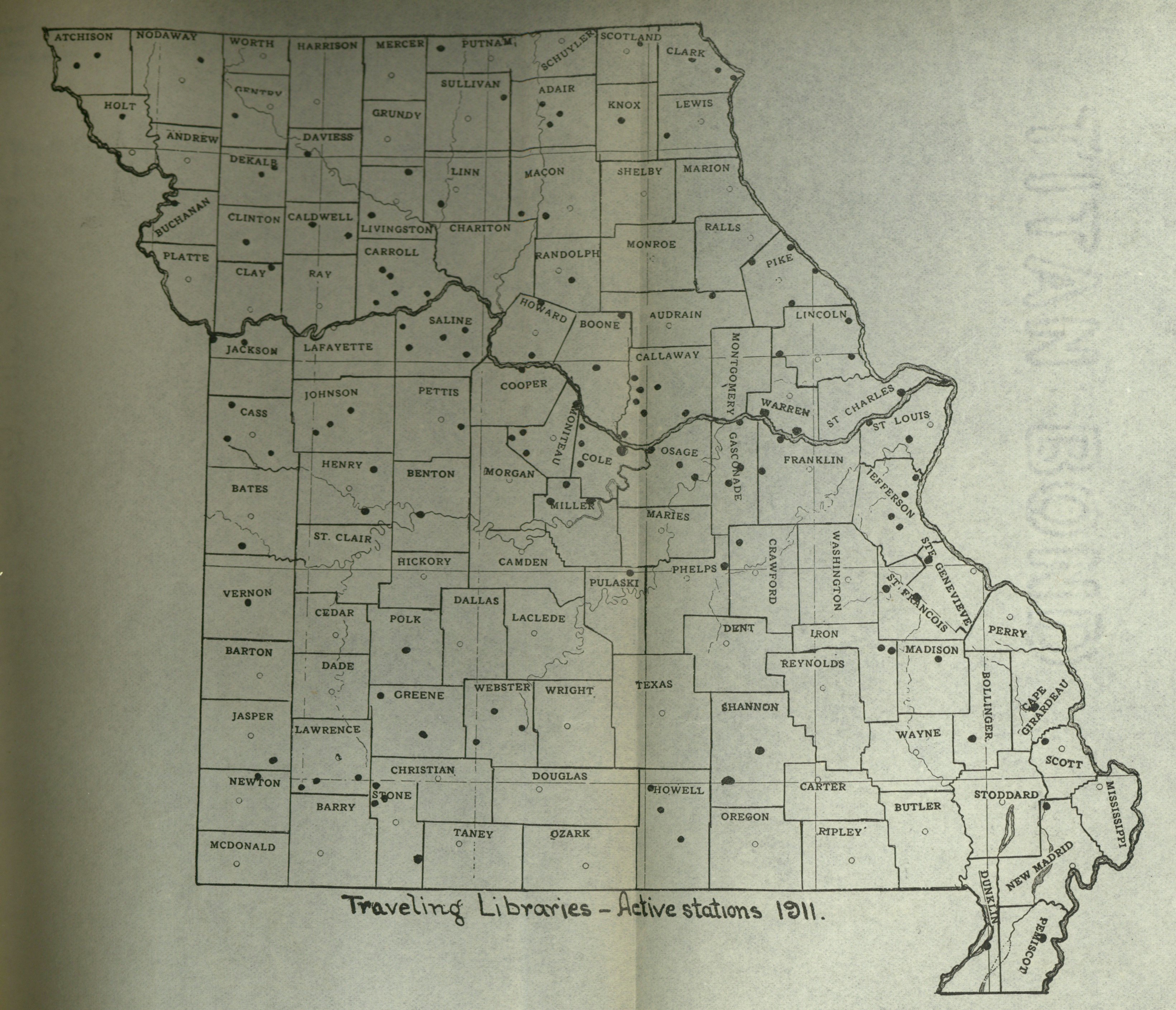 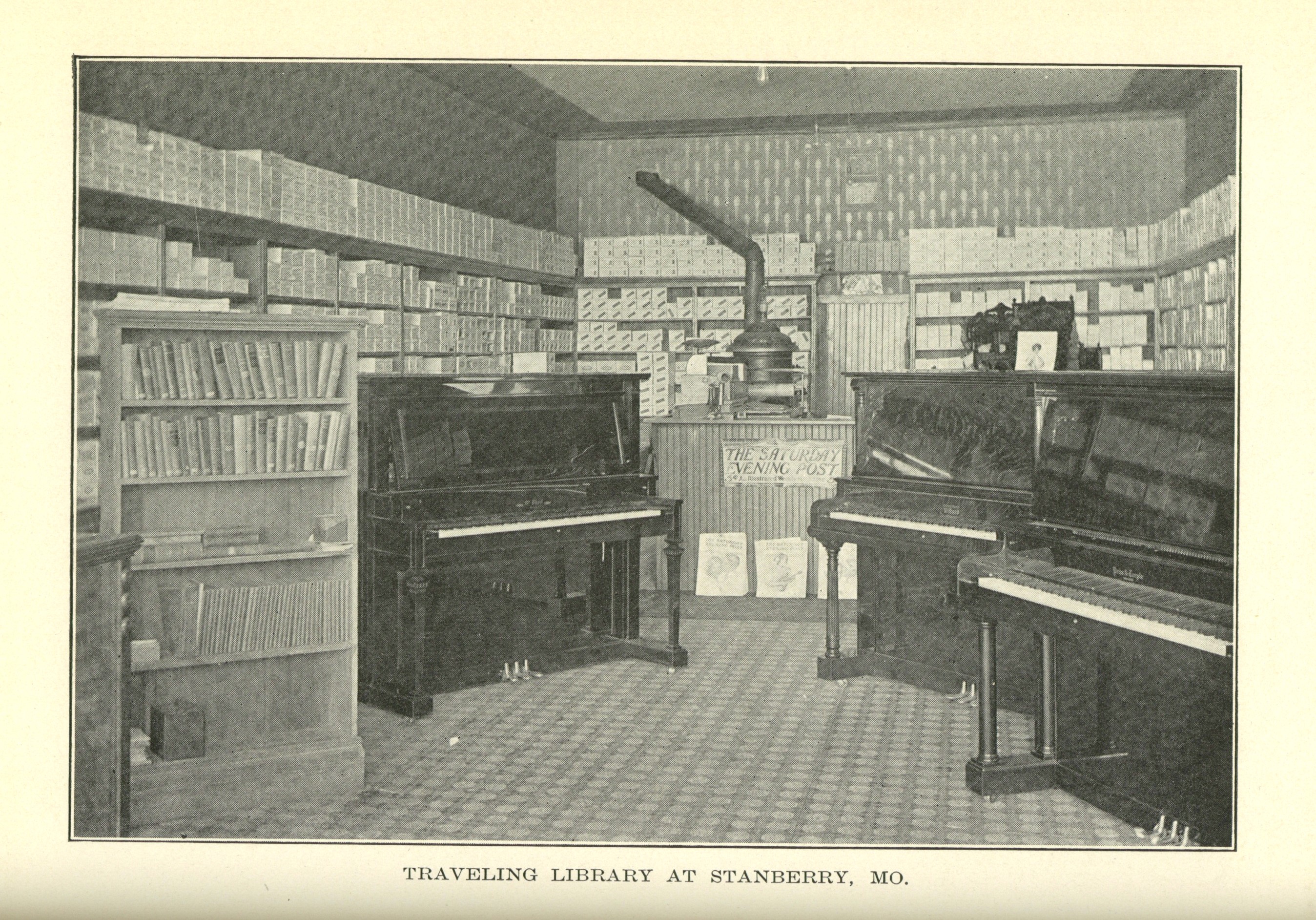 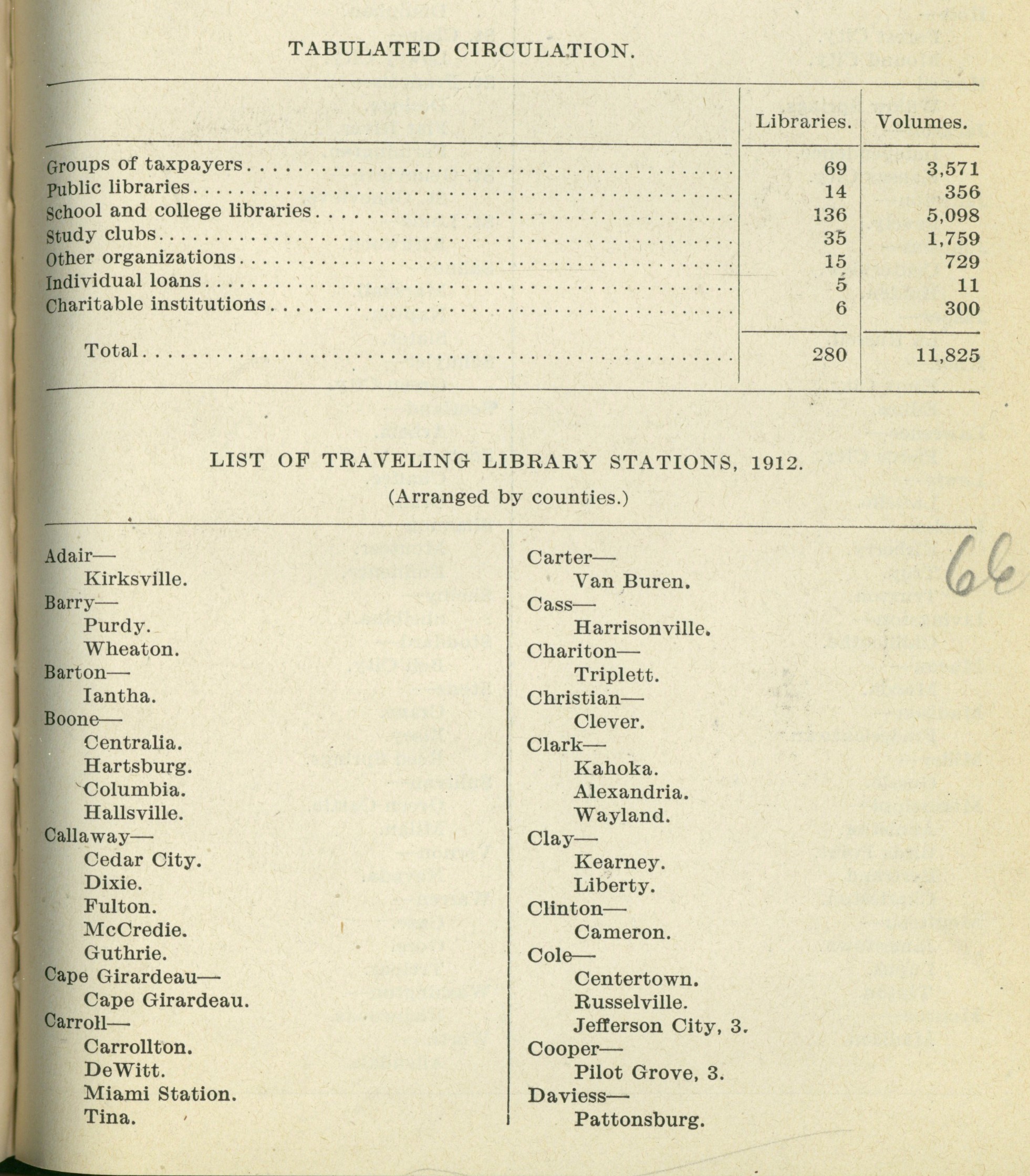 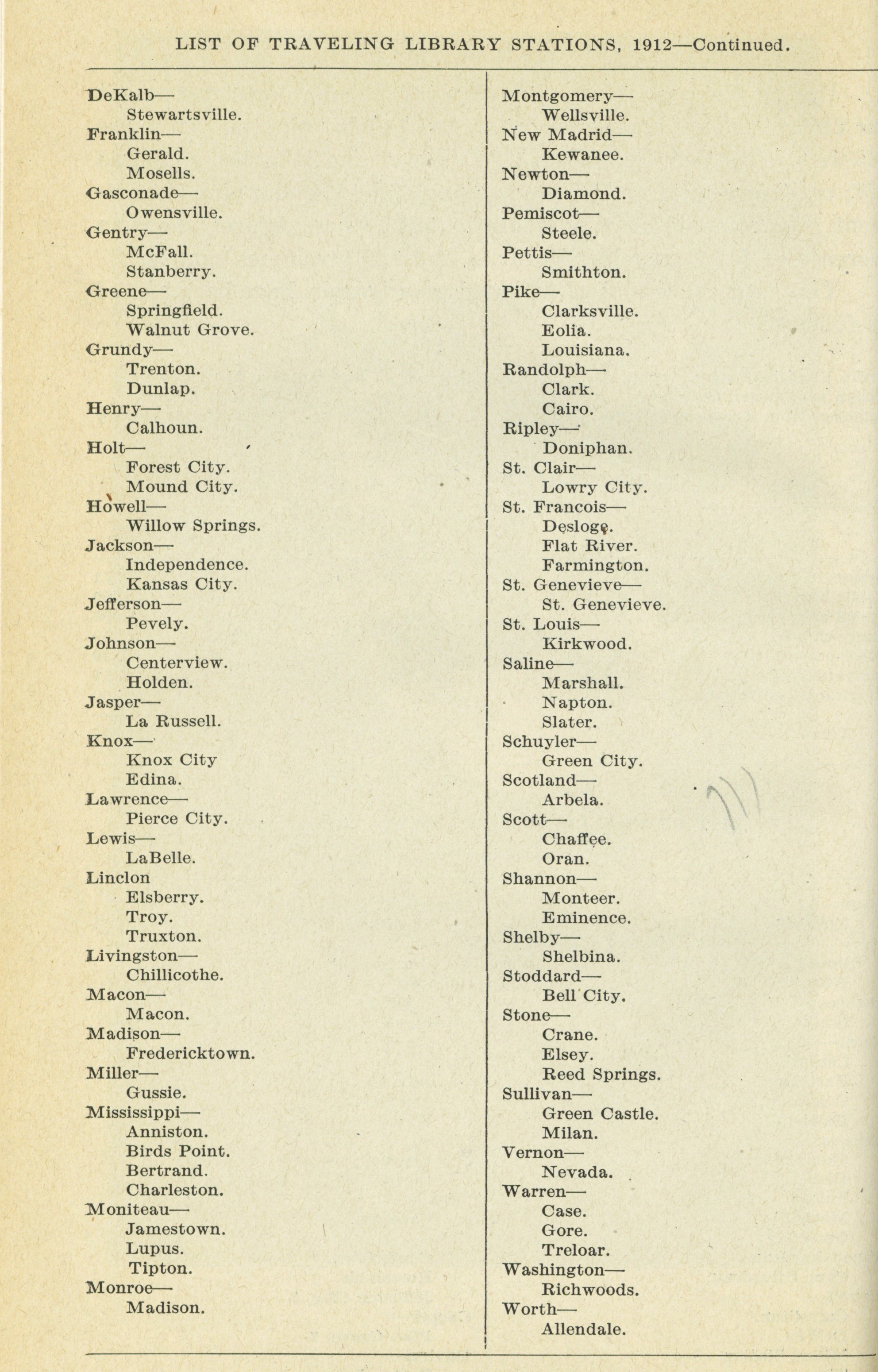 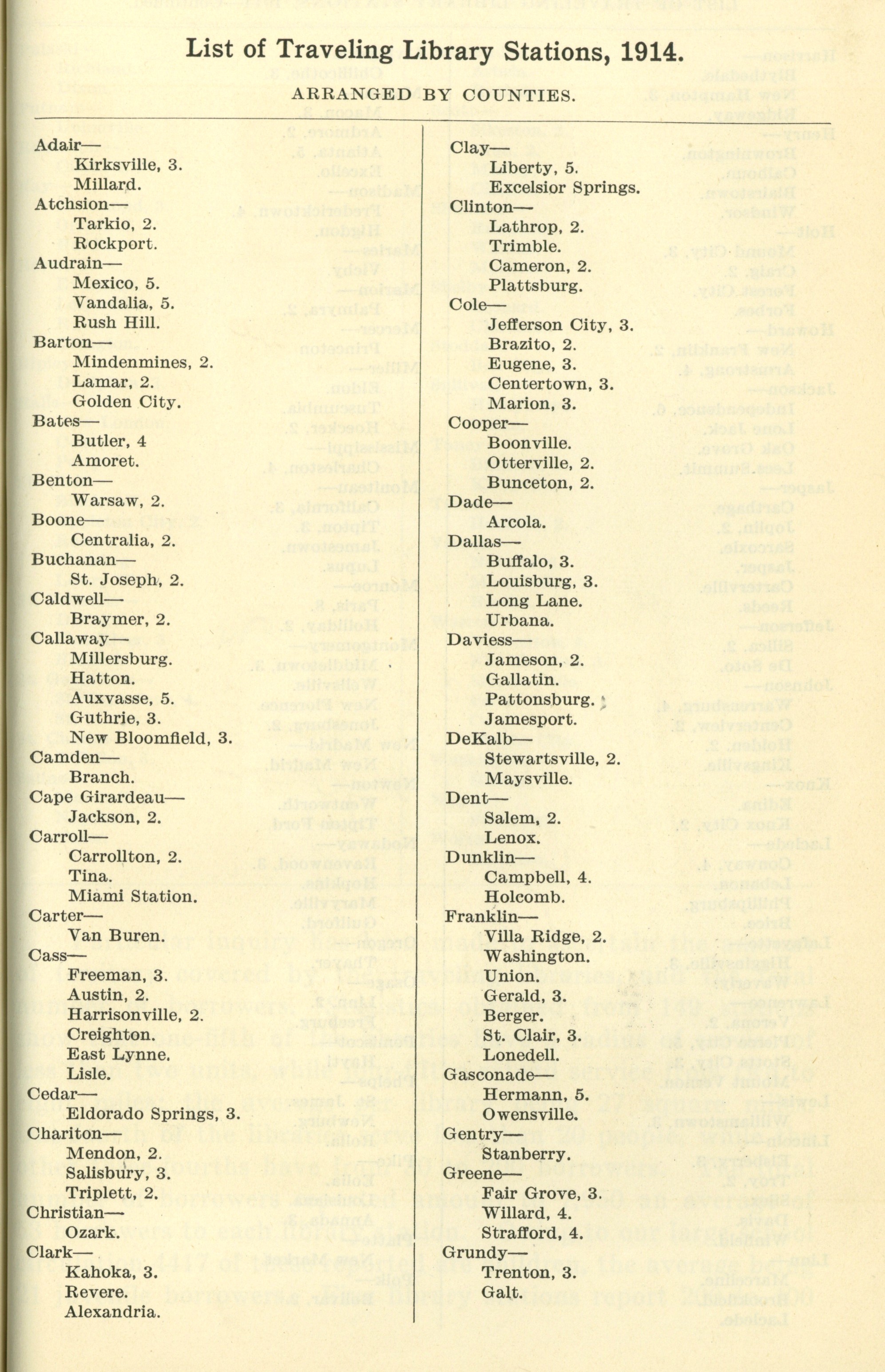 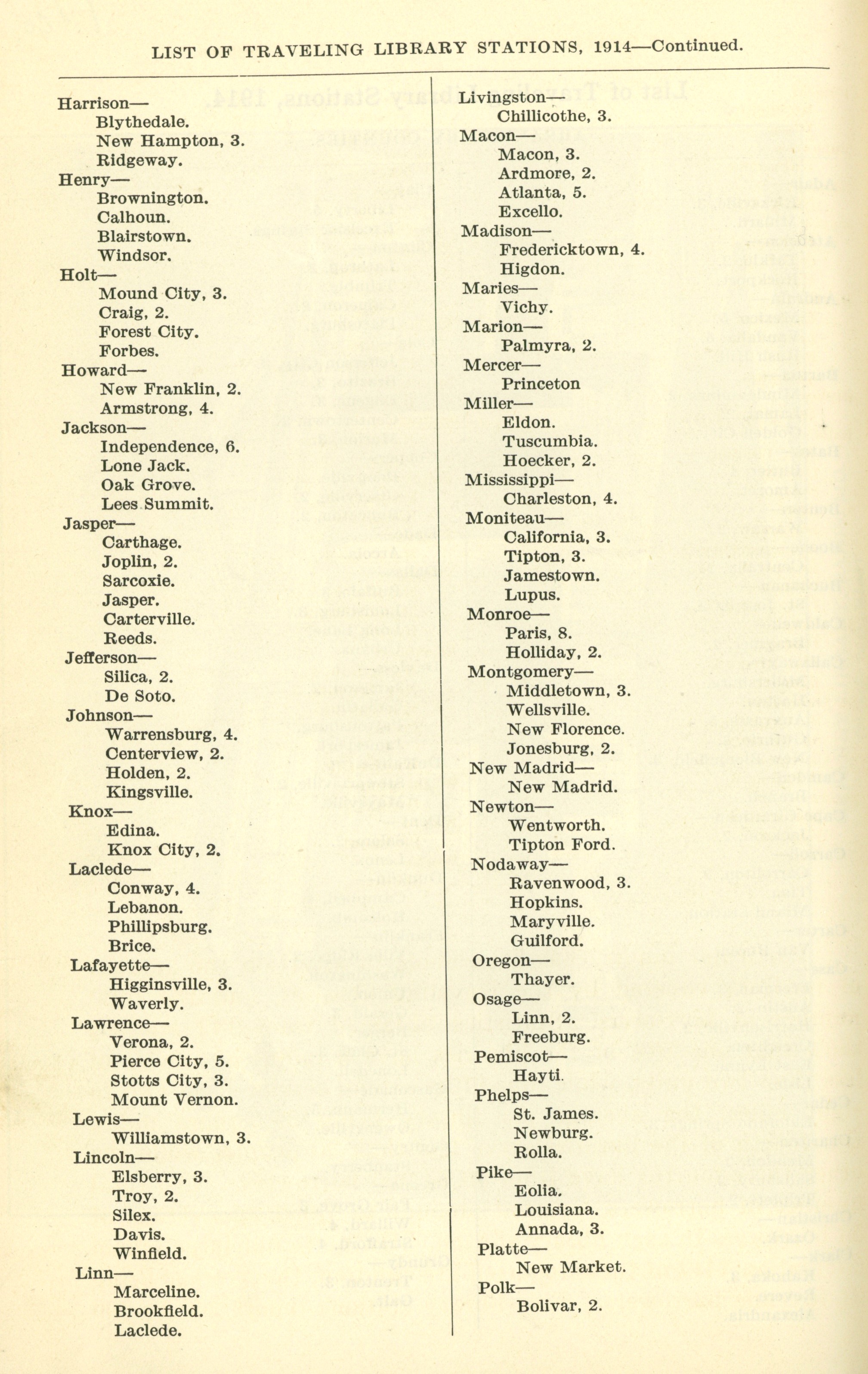 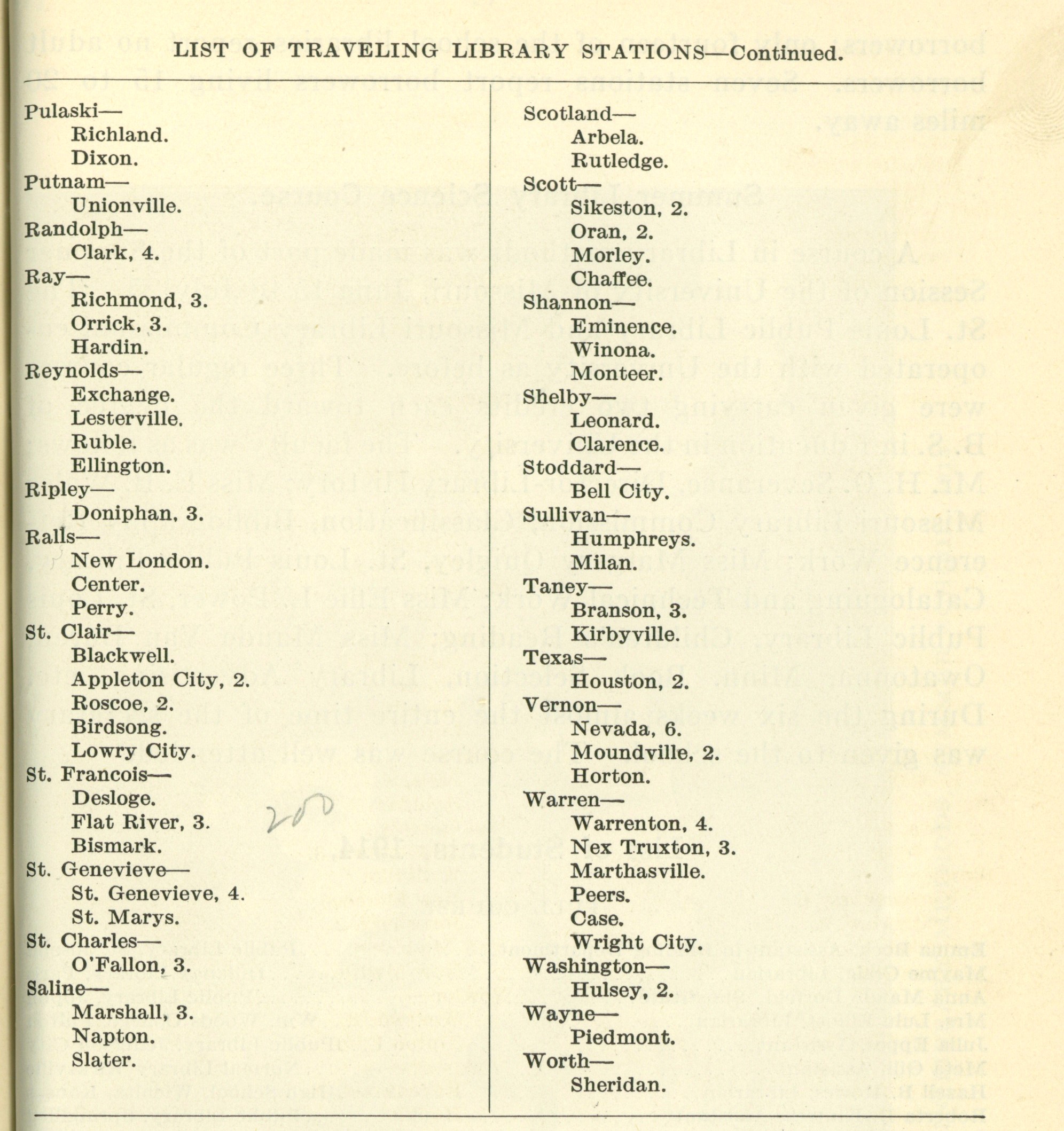 The Commission decided that the organization of traveling libraries was their first duty.  This process was greatly improved by the foundation laid by the Missouri Federation of Women's Clubs and the subsequent donations the Federation made to the Commission.

Missouri's First System of Traveling Libraries: In 1897, the Missouri Federation of Women's Clubs appointed a committee charged with the task to formulate a plan for a traveling library system. In 1899, the committee recommended the following plan to the members: the creation of a bureau of five members to oversee the work and the formation of local branches to which libraries might be sent.

All clubs were asked for books or money, and after a generous response, the first traveling library was sent out on March 1898 to the village of Montrose in Henry County. By November 1899, 17 libraries were circulating and the Federation continued to add a few libraries every year until the libraries numbered 26 and the total number of circulating volumes numbered 1,300. When the Commission formed in 1907, the Federation generously donated 23 of their 26 libraries to the state to be used as part of the Commission's equipment, including 1,150 volumes. Along with the books, the Federation also sent the respective cases and records, as well as a list of its clients with whom the Commission began correspondence.

The Commission's First Collections: Besides the books given by the Federation, the Commission had in the beginning no books from which to create libraries. It was decided that the money left after purchasing the furnishings and equipment for the office would be used to buy books. The purchase of 2,500 books of general literature, 750 volumes of juvenile and 1,750 volumes of adult respectively, were used to make up 50 new libraries for the Traveling Library department.  These purchases represented 500 titles, five copies of each being ordered.  Also, purchases for special and graded libraries were made as well. For the special libraries, 425 volumes were selected on the topics of agriculture, teaching, and domestic science, as well as a collection for circulation among country preachers. For the special school libraries, 743 volumes were purchased, covering all the book recommended by the State Superintendent of Public Schools for grades one to eight. Additional purchases were added for general reference and questions of the day books, for use with debating clubs, study clubs, and like organizations. In total, with the addition of the 1,300 volumes comprising the Federation libraries, the Commission began the year 1908 with a stock of 5,000 volumes from which to draw from for their traveling libraries.

The First Full Year: The development and operations of the traveling libraries continued to be the most important work of the Commission in 1908. In the first full year of operation, the Commission circulated 144 libraries. This included: 51 libraries, of 50 volumes each, to associations of tax-payers banded together for the purpose, 14 to rural schools in addition to the 27 special grade libraries, seven to study clubs, and four designed for teachers' clubs were sent to county school superintendents. While it was impossible to fill all requests due to the limited number of books, December 1908 saw about 4,000 in circulation and a special request for a library to be sent to State Hospital No. 3 in Nevada, Missouri. Interest in traveling libraries grew throughout the year and the Commission was able to increase the book stock by nearly 700 volumes and 25 cases.

Following Years: 1909 saw 173 traveling libraries sent out, with circulation of volumes for the year being 8,922. The book stock continued to grow with 1,118 books purchased. A special effort was made to further develop the system of club loans and special loans for debating. Sixty-four counties had traveling libraries in 1910. While the fire on the Capitol February 5, 1911 saw the relocation of the Commission and subsequent inability to send out libraries until March 14, total yearly circulation numbers reported was 10,601 volumes. 1912 increased traveling libraries by 40 and volumes circulated by 1,737. This year also saw collections of mounted photographs loaned out. The photograph collections were titled: "Great English Masters," "Italian places and churches," and "Paintings from European galleries." 1913 had libraries in 80 counties, with it being noted that Dallas County had a larger number of libraries in rural schools than any other county due to the support of the county superintendent. The use of libraries by clubs continued to grow, with the Commission seeing patronage from: Sorosis Club, Cameron; Culture Club, Charleston; History Club, Holden, Tuesday Club, Kahoka; Bay Culture Club, Montrose; Clio Club, Paris; Bay View Club; Piedmont; Saturday Club, Rolla; woman's Club, Staler; and Woman's Club, Troy. Growing to 95 libraries in 1914 and 103 in 1915, the widespread circulation of traveling libraries in 1916 saw greater demand than the Commission could handle. Thirty-eight groups of citizens could not be promptly served due to the limited supply of books.